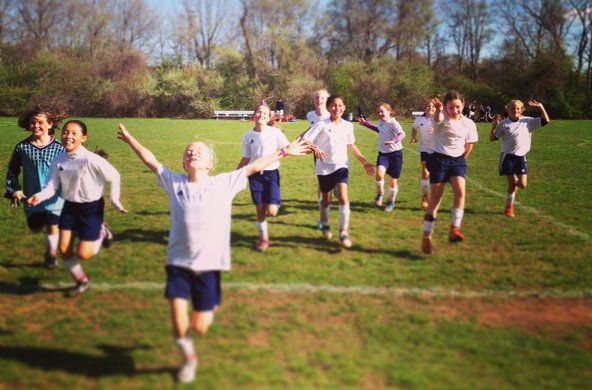 When I first registered my daughter, Lily, for soccer five years ago, I made a conscious decision to take a back seat. I wouldn’t volunteer to be the head coach. Instead, I would take a role as an assistant/orange-slice dispenser. The plan was for me to lend support, but not loom too large over my daughter.

Soccer had always been “Mommy’s thing.” I grew up with the sport, was the captain of a Division 1 team in college, and I’d also just finished my first novel, which – surprise, surprise – was about a young soccer player. Named Lily.

Talk about a little pressure on a 6-year-old.

Lily’s coach was a nice, dedicated guy, for sure. But seconds before the first game started, he turned to me and said: “O.K. You take offense, and I’ll take defense.”

We were apparently going to be coaching soccer, N.F.L.-style. This father meant well, but it was clear that he had no idea how to guide this little team.

So I decided to step up (for the sake of the girls, and for my own sanity). After that season, I became Lily’s coach and have shepherded her team from recreational soccer, to travel, and now, to the premier level. It hasn’t always been easy – or, for that matter, fun. It’s a ton of work and a huge commitment. There’s drama. There’s stress. And wow, are there a lot of emails.

But every time I have considered stepping away (I want my weekends to myself, I want to watch my daughter as a parent, not a coach, and how many things is a mother expected to do in this lifetime?) my husband responds with a question that stops me in my tracks: If not you, then who?

To be clear, it’s not as though there aren’t capable coaches out there. Of course there are. But, having paced the sidelines for five years now, I can count on one hand the number of female coaches I’ve seen. It was the same deal for me, as a child. I played soccer from the age of 8, and never had a female head coach. Not in youth soccer, not in high school, not in college, nor post-college. I loved and valued my coaches, and I still seek their counsel. This is not a dig at male coaches. I just want more women in the game.

“Coaching is fundamentally about connecting; making a kid believe in themselves and giving them a path,” Daniel Coyle, author of the best-selling “The Talent Code” told me. “What better combination of signals do you project when you have a former female athlete who is able to say, ‘I know how you feel because I have been there myself’?”

I was 4 years old when Title IX was passed. Playing soccer paved the way for my admission to Harvard. It empowered me in my career as a journalist, it helped me handle stress, and it inspires me today, as a writer of books about the sport.

I know the reason I didn’t have any female coaches is largely because there was not a generation of women who had played before me — and who had the knowledge and experience to teach me.

Now there is. We are the daughters of Title IX, and this is a plea to you.

We played. We won. We lost. We know how those experiences affected and shaped us. And many of us now are mothers. I’m not just talking about soccer, either. I’m talking about softball, basketball, lacrosse, tennis, etc. There is, at last, a generation of women who have the training and experience to teach their own children and others.

I called one of the most over-qualified mothers I know, the soccer icon Brandi Chastain. “I feel like we have a responsibility to share what we’ve learned, what we’ve experienced,” she said. “I mean, isn’t this how it’s supposed to work?”

It also matters. Holly Gordon, a founder of Girl Rising: Educate Girls, Change the World, a global movement for girls’ education, has a daughter who also plays on a team in the same club. “Sports is so much about life,” she said. “Resilience, discipline, effort, teamwork. It’s really important that girls are learning those lessons from women who were once girls themselves.”

Because this is the way it’s supposed to work.

And if you have doubts — as I sometimes do, when I’m up at 11 p.m., trying to secure field time for a make-up game an hour away from home — just ask yourself: If not you, then who?

Andrea Montalbano is the author of the middle-grade series,Soccer Sisters. She grew up playing soccer in Miami and was co-captain of her college team. She is the head coach of the Yonkers United Rush U10 Girls and assistant coach of her son’s recreational team. Follow her on Twitter and Facebook.